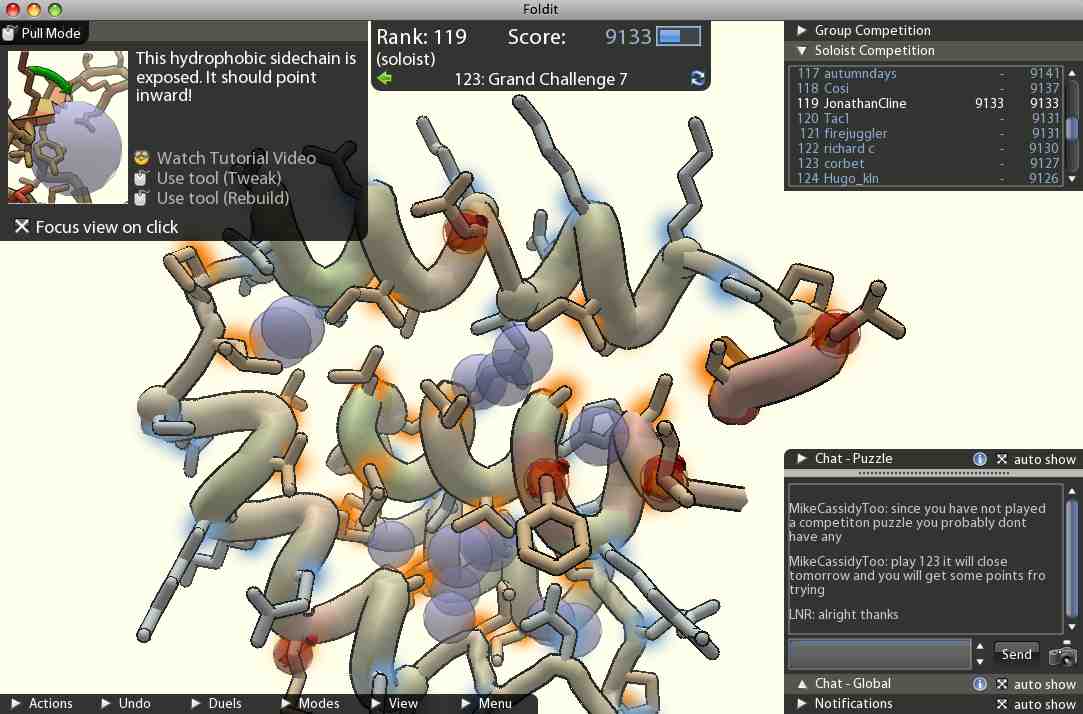 You can see John's blog post about the game here: http://88proof.com/synthetic_biology/blog/archives/247 I pasted his post below for your convenience. John writes:

"“Protein folding” is what again?

It’s this: Foldit (curiously, at the web address: “fold.it”). And it’s fun to play. Addictive, really. Check out the picture:

After I had been playing a while, my 8-year old niece came over to my laptop to see what the cute sound-effects were all about. After a minute of watching, she said: “Tell me the web site, I want to play too!” Yeah, no kidding.

“Foldit is a revolutionary new computer game enabling you to contribute to important scientific research,” according to the Fold.it website. The game tracks the score of your protein’s folds, and a higher score ranks higher against other users who are also folding the same protein.

Foldit runs on Microsoft Windows, Mac OS/X, and Linux. There are “introductory puzzles” which teach the basics — each puzzle gets harder and builds on the previous puzzles. At first, I had no idea what I was doing. After finishing the introductory puzzles, I started on a real protein folding challenge. As you can see in the picture my rank is still at 119 out of 300 or so.. I’ve still got some folding to do.

It’s educational, since I haven’t run protein folding simulations by hand before. Most of the biological details are hidden from the game player. The gamer focuses on increasing the score and getting rid of the red warning colors, and enjoying the “Rank Up!” announcements."