Lab-on-a-Chip! What is it? and links to a journal full of the latest research papers.

Lab-on-a-chip (LOC) scales down many lab functions and processes and puts them into a miniature chip! Below you will find an excelent LOC Journal with free access to many research papers. 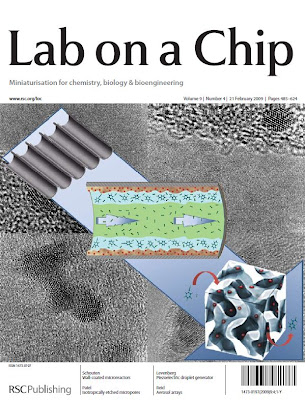 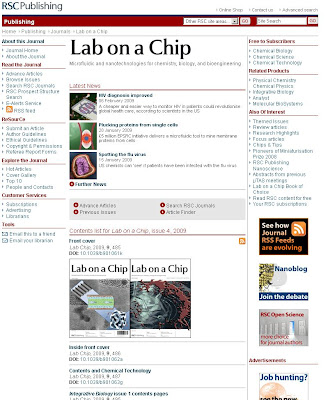 WIKI: A lab-on-a-chip (LOC) is a device that integrates one or several laboratory functions on a single chip of only millimeters to a few square centimeters in size. LOCs deal with the handling of extremely small fluid volumes down to less than pico liters. Lab-on-a-chip devices are a subset of MEMS devices and often indicated by "Micro Total Analysis Systems" (µTAS) as well. Microfluidics is a broader term that describes also mechanical flow control devices like pumps and valves or sensors like flowmeters and viscometers. However, strictly regarded "Lab-on-a-Chip" indicates generally the scaling of single or multiple lab processes down to chip-format, whereas "µTAS" is dedicated to the integration of the total sequence of lab processes to perform chemical analysis. The term "Lab-on-a-Chip" was introduced later on when it turned out that µTAS technologies were more widely applicable than only for analysis purposes.
Posted by Eric Fernandez at 2:37 PM