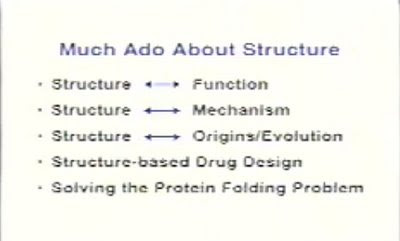 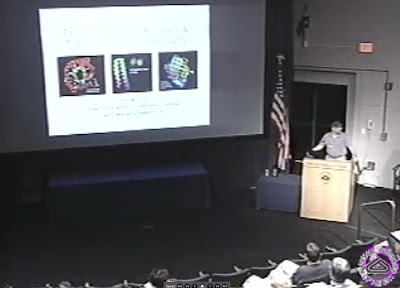 To quote David Wishart, Structure is a great way of understanding functions. The functions of enzymes, the functions of proteins, and therefore the function of genes. In fact, we often learn more about the functions by looking at a structure then by just looking at the sequence. The mechanisms by which proteins and enzymes work is often revealed to us by structure, and again that's often not clear by looking at the sequence. And its the same thing if were think about trying to understand how a bike works. If we simply gave you a list of bike parts it would still be hard to figure out just what a bike does, but looking at a picture of a bike you understand that it rolls along on two wheels.

COMPARING STRUCTURES
As you probably know, to compare DNA sequences, Geneticists have a well known web server tool called BLAST. This gives them an 'expect value' as to how similar two sequences are. That's the main way they are able to compare human and chimpanzee DNA and can say its about 99% the same. How do Structural Biologists compare protein structures? Well they can't just look at two structures and say that looks 'kinda similar.' They have to find some sort of objective quantitative way to tell differences and similarities. In the structural biology world the equivalent to Blast is something called Rigid Body Superpostioning or "Superimposing." Its an objective quantitave way to overlay two or more objects its a mathamatically intense process and involves using rotational operators and matrixes and vectors but in fact these tools are the same tools game programers use to make all the visual effects. So if you want to do the equivallent of a Blast alignment in structrual space, Structural Biologists use a web server called "Superpose" It allows you to take any pair or multiple set of structures and compare them. If you want to look at chimp hemoglobin and human hemoglobin you can upload the two structures and superimpose them and compare them structurally. Why would want to do that? A genetic sequence comparison and find that they are 98% identical but you might find that structurally their are important key differences.

And here's more informaiton on Structural Biology
Wiki: Structural biology is a branch of molecular biology, biochemistry, and biophysics concerned with the molecular structure of biological macromolecules, especially proteins and nucleic acids, how they acquire the structures they have, and how alterations in their structures affect their function. This subject is of great interest to biologists because macromolecules carry out most of the functions of cells, and because it is only by coiling into specific three-dimensional shapes that they are able to perform these functions. This architecture, the "tertiary structure" of molecules, depends in a complicated way on the molecules' basic composition, or "primary structures." Structural biology is that branch of life science,which deals with the study of molecular strucuture of biological macromolecules like proteins and nucleic acids.

Posted by Eric Fernandez at 4:13 PM