Why is GFP so important? "Think of GFP as the microscope of the twenty-first century. Using GFP we can see when proteins are made, and where they can go. This is done by joining the GFP gene to the gene of the protein of interest so that when the protein is made it will have GFP hanging off it. Since GFP fluoresces, one can shine light at the cell and wait for the distinctive green fluorescence associated with GFP to appear." Osamu Shimomura, Marty Chalfie and Roger Tsien were awarded the Chemistry Nobel Prize in 2008 for the discovery and development of the green fluorescent protein, GFP. 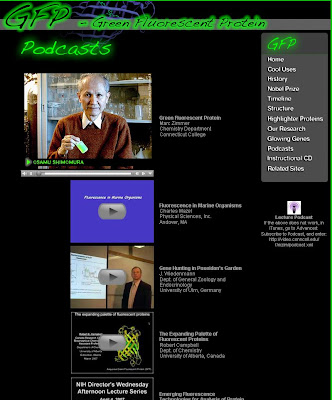 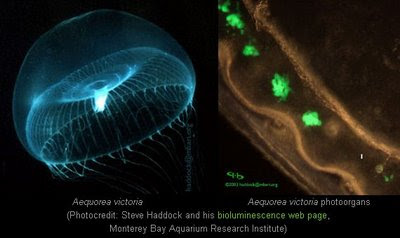 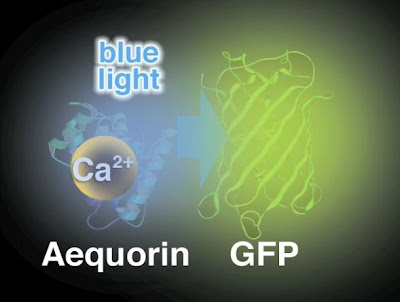 "Green Fluorescent Protein (GFP) has existed for more than one hundred and sixty million years in one species of jellyfish, Aequorea victoria. The protein is found in the photoorgans of Aequorea, see picture below right. GFP is not responsible for the glow often seen in pictures of jellyfish - that "fluorescence" is actually due to the reflection of the flash used to photograph the jellies.In Aequorea victoria a protein called aequorin releases blue light upon binding with calcium. This blue light is then totally absorbed by the GFP, which in turn gives off the green light as in the animation below. 1994 GFP was cloned. Now GFP is found in laboratories all over the world where it is used in every conceivable plant and animal. Flatworms, algae, E. coli and pigs have all been made to fluoresce with GFP."
Posted by Eric Fernandez at 10:39 PM