Back to Basics! Reviewing Units of Measure

Is all this talk of Kilojoules Per Mole leaving you perplexed? It's time to make sure we know all the units of measure. Here is a silly but informative youtube video to make sure your basic foundation is sound. Then check out the sections below for an overview of each type of measurement.

Ok. Now that that's out of the way. Onwards to Mole Land!

MOLES: THE AMOUNT OF SUBSTANCE
In five minutes you will not be confused about Moles ever again! Thank goodness! Thank you "Chemguy" for making the Mole Madness end!

1 lb-mol. ≡ 453.592 37 mol (this relation is exact, from the definition of the international avoirdupois pound). 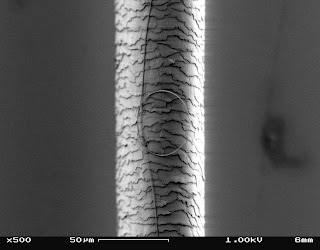 The image above is a micrograph of a (nanowire curled into a loop in front of a strand of human hair. The nanowires can be as slender as 50 nanometers in width, about one-thousandth the width of a hair. Credit: Limin Tong/Harvard University WIKI: A nanometer, symbol nm, is a unit of length in the metric system, equal to one billionth of a metre (i.e., 10-9 m or one millionth of a millimetre). It is one of the more often used units for very small lengths, and equals ten Ångström, an internationally recognized non-SI unit of length. It is often associated with the field of nanotechnology. It is also the most common unit used to describe the manufacturing technology used in the semiconductor industry. It is the most common unit to describe the wavelength of light, with visible light falling in the region of 400–700 nm. The data in compact discs is stored as indentations (known as pits) that are approximately 100. Formerly, millimicron (symbol mµ) was used for the nanometre. The symbol µµ has also been used [1][2][3].

FORCE
The newton (symbol: N) is the SI derived unit of force, named after Isaac Newton in recognition of his work on classical mechanics.The newton is the unit of force derived in the SI system; it is equal to the amount of force required to give a mass of one kilogram an acceleration of one meter per second squared. Algebraically:

Examples:
ENERGY
WIKI: The joule is the derived unit of energy in the International System of Units. It is defined as:

One joule is the amount of energy required to perform the following actions:

1 joule is approximately equal to:

Practical examples. One joule in everyday life is approximately: PRESSURE
WIKI: The pascal (symbol: Pa) is the SI derived unit of pressure, stress, Young's modulus and tensile strength. It is a measure of perpendicular force per unit area i.e. equivalent to one newton per square meter or one joule per cubic metre. In everyday life, the pascal is perhaps best known from meteorological barometric pressure reports, where it occurs in the form of hectopascals (1 hPa = 100 Pa).[1]. In other contexts, the kilopascal is more commonly used, for example on bicycle tire labels.[2] One hectopascal corresponds to about 0.1% and one kilopascal to about 1% of atmospheric pressure (near sea level): one hectopascal is thus equivalent to a millibar; one atmosphere is equal to 1013.25 hPa. The pascal (Pa) or kilopascal (kPa) as a unit of pressure measurement is widely used throughout the world and largely replaces the pounds per square inch (psi) unit except in some countries still using the Imperial measurement system. Vehicle owners' guides now specify tire inflation in kilopascals.


And here's an online converter you can play around with: http://www.imperialtometric.com/conversion_en.htm
Posted by Eric Fernandez at 11:01 AM